TEHRAN (defapress)- Leader of Asa'ib Ahl al-Haq Resistance Movement Qais Khazali stated on Sunday if American troops do not leave Iraq, they would be considered an occupying force, as Iraqi lawmakers have unanimously approved a bill, demanding the withdrawal of all foreign military forces led by the United States from the country.
News ID: 79813 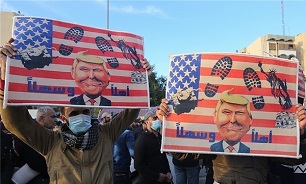 "US troops must leave Iraq immediately," Khazali stated, and warned, "If they fail to meet the deadline, they are regarded as occupying forces, and will be treated accordingly."

"The US' porpuse in Iraq is to intervene in the Arab country's internal affairs, not to fight against Daesh (ISIL or ISIS)," he stated.

The United States sanctioned Asaib Ahl al-Haq group on Friday, claiming it was an Iranian proxy.

Earlier this week, Washington Embassy in Baghdad barely escaped a takeover by Iraqi protesters following a series of US airstrikes that killed 28 popular forces a week ago. The demonstrators chanted “Death to America” and even managed to set checkpoints on fire, calling for the expulsion of the US ambassador and American military servicemen from the Arab country.