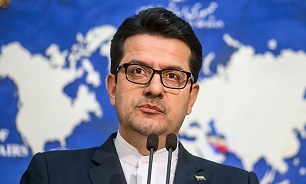 In three separate posts in three languages on his Twitter account early on Sunday, Mousavi took a swipe at the French president for using a fake name for the Persian Gulf.

“I remind Monsieur Macron that the gulf located south of Iran has only one name and that is the #PersianGulf. Your military presence in the Persian Gulf is as wrong as your naming it. Both mistakes are huge but compensable,” the Iranian Foreign Ministry spokesman said, as he posted the same tweet in Persian and French as well.

His reaction came after Macron said in a tweet that France had deployed the Jaguar Task Force mission to "the Arabian Peninsula and in the Arab-Persian Gulf," claiming that the military buildup was meant to strengthen maritime security in the strategic region.

More than 20% of world’s oil and 35% of oil traded by sea passes through the Strait of Hormuz, making the Persian Gulf region one of the most highly important strategic places in the world for international trade. In addition the three Persian Gulf Islands of the Greater Tunb, Lesser Tunb and Abu Mussa are also located here and are part of Iran’s sovereignty.

For thousands of years world maps from ancient times dating as far as 500 B.C. to the present have all been referring to this body of water as the Persian Gulf.