TEHRAN (defapress) – Iranian Foreign Ministry Spokesman Seyed Abbas Mousavi said the remaining parties to the 2015 nuclear deal had already been given a warning from President Hassan Rouhani that Tehran might leave the Nuclear Non-Proliferation Treaty (NPT) as a compensatory measure.
News ID: 79974 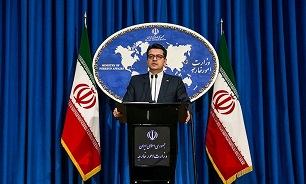 In remarks on Tuesday, Mousavi provided an explanation of the comments that Iranian Foreign Minister Mohammad Javad Zarif had made at the Iranian Parliament on Monday about the Islamic Republic’s possible withdrawal from the NPT.

Rouhani had already warned the Group 4+1 (Russia, China, the UK, France and Germany) in a letter in May that Iran’s withdrawal from the NPT could be an option, the spokesperson added.

What Zarif said about a possible exit from the NPT during the Monday session of the Parliament was indeed part of the letter that Rouhani had sent to the heads of the G4+1 in May, Mousavi noted, adding that the presidential letter has made it clear that if Iran’s nuclear case is referred to the UN Security Council and the previous resolutions on sanctions against Iran resurface, the Islamic Republic may withdraw from the NPT as a compensatory option.

Last week, the three European signatories to the 2015 nuclear deal with Iran formally triggered the dispute mechanism within the agreement, accusing Iran of having violated the accord. Iran would now be asked to resolve the so-called dispute with the European trio, and the process could ultimately lead to the re-imposition of the Security Council’s sanctions that were lifted by the accord.

Zarif explained that Iran was the party to initially trigger the dispute mechanism in 2018 by sending three letters to the European Union to notify them of Tehran’s dissatisfaction with Europe’s non-commitment to the agreement.

The Islamic Republic, the minister added, was then forced to resort to the nuclear countermeasures as the Europeans remained in violation of the accord.

He, however, said Tehran’s measures were reversible provided Europe would begin minding its JCPOA obligations.

“But if Europeans keep up their actions based on political games, we have various options because their actions lack legal standing,” he said.

Zarif noted however that before taking the final step of withdrawing from the NPT, Iran has other steps to ponder.