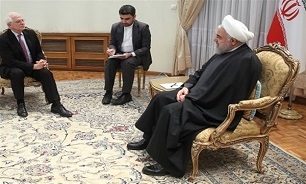 In the meeting in Tehran on Monday evening, Rouhani criticized the signatories to the JCPOA for failing to fulfill their obligations after the US’ unilateral withdrawal from the agreement.

Referring to 12 years of efforts and measures which finally led to the conclusion of the JCPOA, he said the US’ unilateral move to walk away from the deal has unfortunately created numerous problems for other parties in implementing the accord.

Rouhani also pointed to Iran’s suspension of its JCPOA obligations and said the country’s rollback of its commitments falls within the framework of the nuclear accord aimed at preserving it.

“The Islamic Republic of Iran is still ready for interaction and cooperation with the EU to settle issues, and whenever the opposite side completely upholds its commitments, Iran will also return to its commitments,” the president said.

The EU foreign policy chief, for his part, emphasized that the JCPOA parties should try to resolve the obstacles in the way to implementation of the deal and expressed regret over the European parties’ failure to fulfill their obligations.

In May 2018, US President Donald Trump pulled his country out of the 2015 nuclear deal.

Iran and the remaining parties launched talks to save the JCPOA after the US withdrawal, but the three EU parties to the deal – France, Britain and Germany – have failed to ensure Iran’s economic interests.