'Deal of the Century' to die prior to Trump’s death

TEHRAN (defapress) – The US President Donald Trump’s plan of 'Deal of the Century' will die before his life comes to an end, said Leader of the Islamic Revolution Ayatollah Seyyed Ali Khamenei on Wednesday
News ID: 80121 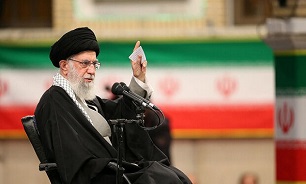 Ayatollah Khamenei made the remarks in a meeting with people from all walks of life in Imam Khomeini’s Hosseiniyeh on Wednesday.

"You saw that the U.S. bullies and hooligans unveiled the plan of the so-called Deal of the Century. They have wishfully chosen a big name for it so that it may be realized, but this plan is stupid, a sign of viciousness and has been detrimental to them since day one," said Ayatollah Khamenei.

"The American plot of the 'Deal of the Century' will die before Trump dies," he added.

"The so-called plan of the ‘Deal of the Century’ is foolish because it will definitely NOT have any result. It is foolish to come and sit, spend money, invite, create uproar, and unveil a plan that is doomed to failure," Leader noted.