TEHRAN (defapress) – Deputy Commander of the Islamic Revolution Guards Corps (IRGC) for Coordination Rear Admiral Ali Fadavi said the US government has faced defeat in all of its military actions against Iran without an exception.
News ID: 80129 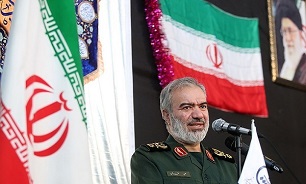 Addressing a ceremony held in the holy city of Qom on Thursday to commemorate the anniversary of the 1979 Islamic Revolution’s victory, Rear Admiral Fadavi deplored the Washington government’s conspiracies against Iran over the past decades.

“The United States and its supporters cannot claim that there has been a single military action against Islamic Iran in which they reached victory,” he said, adding that in all cases they have been defeated without exception.

The commander further pointed to the US measures in the Middle East and said all of its military moves in Yemen, Syria, Lebanon, Iraq, and other regional countries have been fruitless.

The US has ratcheted up pressure on Iran since 2018 after withdrawing from the 2015 nuclear deal, known as the Joint Comprehensive Plan of Action (JCPOA).

Since then, the administration of US President Donald Trump is trying to reduce Iran’s oil exports to “zero,” and has sent an aircraft carrier strike group, a bomber squad, an amphibious assault ship, and a Patriot missile battery to the Middle East to try to stack up pressure on Tehran.

Iranian officials, however, have dismissed such moves as psychological warfare, saying the country has its own ways of circumventing the American bans.