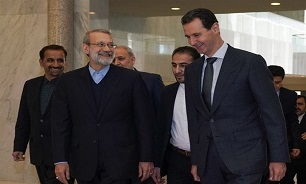 In a meeting with Syrian President Bashar Assad in Damascus on Sunday, Larijani affirmed Iran’s continued support for Syria in its efforts to eliminate terrorism in all its territories, stressing the importance of the recent victories made by the Syrian army against the terrorists, SANA reported.

He further expressed his confidence in the ability of the Syrian people and military to complete the liberation of all their lands and restore Syria’s position in the region.

Assad, for his part, highlighted the successes of the Syrian military and said, “The Syrian people are determined to liberate all Syrian territories”.

He also said terrorists in northwestern Syria were using residents as “human shields,” in an attempt to stop Syrian troops from advancing into the territory.

On Sunday, Syrian troops made significant advances against the last militant-held enclaves in the country’s northwest, consolidating the army’s hold over the key Aleppo province.

The army managed to put the provincial capital of Aleppo out of the firing range of militant groups for the first time in years, another sign of the government’s growing control of the area.

According to reports, 30 villages and towns around the city in the western Aleppo countryside were captured on Sunday.

Idlib and the area north of Aleppo form part of the only large territory still in the hands of militants. The Syrian military has managed to undo militant gains across the country and bring back almost all of the Syrian soil under government control.

Syria has been gripped by civil war since March 2011 with various terrorist groups fighting against the central government.