TEHRAN (defapress) – Thousands of refugees and migrants streamed from Turkey's western frontier on Sunday, attempting to enter Greece by land and sea after Turkey said its borders were open to those wanting to reach Europe.
News ID: 80381 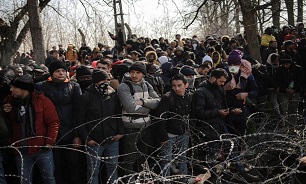 Turkish President Recep Tayyip Erdogan's decision to open his country's borders with Europe made good on a longstanding threat to let refugees into the continent, Aljazeera reported.

His announcement marked a dramatic departure from the previous policy of containment, an apparent attempt to pressure Europe into offering Turkey more support in dealing with the fallout from the Syrian war to its south.