TEHRAN (defapress) – The coronavirus global death toll exceeded the 200,000 threshold, according to a tally by the Johns Hopkins University, with confirmed cases expected to top three million in the coming days.
News ID: 80933 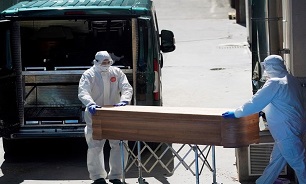 Confirmed cases stand at over 2.8 million, but that number is expected to rise quickly as testing becomes more widely available.

Over 800,000 people have reportedly made a full recovery from the virus.

Despite the rise in cases and deaths, countries hit the hardest by the virus – including France, Italy, Spain, and Germany – have seen their fatality rates decrease in recent days. The US has also seen declines, especially in New York, which quickly became the epicenter of the pandemic in the country but is now recording lower death and hospitalization rates. Various states, including Georgia and Texas, have begun taking their first steps to ease lockdown measures put in place to slow the spread of the virus.