TEHRAN (defapress) – The General Staff of the Iranian Armed Forces denounced the presence of American forces in the region as the root cause of insecurity for regional countries, warning that any provocative move by the US will draw a harsh response from Iran’s military forces.
News ID: 80948 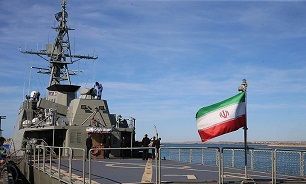 In a statement on Monday, the General Staff of the Iranian Armed Forces said, “High-risk behaviors, which make shipping (in regional waters) insecure, have started since the adventurist and terrorist country of America and some of its allies came to this sensitive region.”

"As it has been repeatedly announced, the Islamic Republic of Iran has never initiated and will never start any tension and conflict in the region, but will always defend its territorial integrity with preparedness, strength and power," the statement added.

"Any act of adventurism, harassment and provocation will be met with the Iranian Armed Forces' decisive response and hostile forces, including the US, will be responsible for consequences," it warned, Press TV reported.

The Islamic Republic strongly believes that regional countries have necessary capabilities to maintain security in the Persian Gulf, the strategic Strait of Hormuz and the Sea of Oman, and guarantee security of energy flow through the region, the statement said.

"False extra-regional coalitions led by the US will not only fail to help ensure stability and security in this region, but will also disrupt regional order and security," it pointed out.

It said the US’ precarious presence and its establishment of military bases in the region have been the root causes of insecurity, illegal moves and acts of mischief, adding that the Islamic Republic has repeatedly warned international bodies about Washington's destabilizing moves, which run counter to international laws and regulations.

The Armed Forces advises the US and its allies to abide by Iran's regulations as well as international rules and to avoid any acts of adventurism, measures in violation of principles of safe navigation, and providing false accounts of their provocative behaviors while passing through Iran's territorial waters, it said.

The statement stressed that the military forces of the US and its allies need to withdraw from the region and allow regional countries to establish security in cooperation with each other as the sole secure way to enforce peace and stability in the Persian Gulf, the Strait of Hormuz and the Sea of Oman.