Global Security Impossible with US Presence in Region

TEHRAN (defapress)- Iranian Navy Commander Rear Admiral Hossein Khanzadi said that establishment of security in the world is impossible as long as the US has illegally deployed its forces in the region.
News ID: 80969 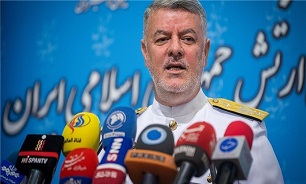 Collective and global security is meaningless as far as America and its allies are present in this region, Rear Admiral Khanzadi said in a statement on Wednesday on the occasion of the national Persian Gulf day.

“American security means terror, threats and controlled insecurity, and the imposition of proxy wars on the region and the world.”

“We are serious about maintaining sustainable peace and security in the region and will not let any foreign agent to make the area insecutre,” he added.

“The Persian Gulf derives its identity from Islamic Iran and it is as well part of the identity of the Islamic Republic of Iran, and this issue is not negotiable and negligible. In this regard, it is the geography and geopolitical weight of the countries that are important, and others have no choice but to obey, and this cannot be manipulated.”

“When we look at history, Iran has never had as much self-reliant power and credibility at sea as it does today; power cannot be borrowed,” he added.

Iran's geopolitical capacities, he maintained, are being activated in the Persian Gulf based on the ideals of the Islamic Revolution.

The Persian Gulf, the Strait of Hormuz, Makran coasts and the Caspian Sea are the vital locations for reviving Iran’s maritime civilization in the second step of Revolution, said Khanzadi, noting that these are important reasons showing why the enemies are making every effort to thwart these capacities.

Relying on religious and revolutionary ideals and its youth, Iran of the next century will take giant steps in creating a modern Islamic civilization and this is what the West is worried about, he said. “This is the start of the end of arrogance’s domination over the region.”