TEHRAN (defapress) – The Islamic Revolution Guards Corps forces clashed with a team of anti-revolution elements in a border region in western Iran, during which three servicemen were martyred, the IRGC said.
News ID: 81028 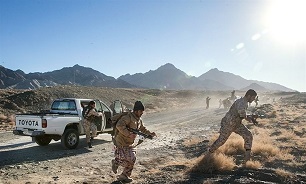 According to the public relations department of the IRGC’s Hamze Sayyid al-Shohada Base, its servicemen clashed with the anti-revolution team in Iran’s western province of Kurdistan on Tuesday, killing a number of the hostile elements.

The clash took place near the city of Divandarreh, the statement noted.

Three IRGC servicemen, including a colonel, were martyred in the armed clash with the gunmen, it added.

In July 2018, anti-revolutionary terrorists attacked a border post of the Hamzeh Seyed al-Shohada Base in Kurdistan Province, killing 11 forces of the base.