TEHRAN (defapress) - Russian President Vladimir Putin has congratulated the graduates of military academies upon Victory Day. The message was published on the Kremlin’s website on Sunday.
News ID: 81059 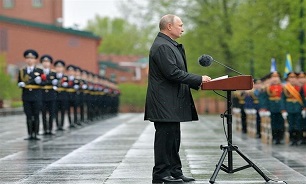 "We will go ahead with developing and improving our armed forces. Under any circumstance we will implement the plans for reinforcing all arms and services and equipping them with advanced weapons and other hardware, including strategic ones, unparalleled high accuracy and hypersonic systems, unmanned aerial vehicles and robotized combat systems," the message runs, TASS reported.

Putin stressed the need for enhancing the intensity of combat training and for practicing "new methods of cooperation by troops during snap checks with the use of the most advanced technologies that will determine the image of Russia’s Army and the Navy in the future."

"It is a great honor and responsibility to start one’s career on the sacrosanct day of May 9, when our country and the whole world celebrate the 75th anniversary of the Great Victory, pay respects to the immortal heroism of the Soviet people, and the courage and valor of the Red Army’s soldiers and commanders, who defended the Motherland, quashed Nazism and saved humanity from slavery and extermination," Putin said, adding that the Russian army should be always prepared to provide an adequate response to any threats.

He expressed the certainty that the newly-commissioned officers would cope with their tasks professionally and decently. Putin promised to do his utmost to provide proper conditions for career military officers’ service and everyday life. Also, he thanked the teachers, who instructed future officers and taught them the basics of the "unwritten laws of military honor and comradeship."