US main ISIL sponsor in Iraq

TEHRAN (defapress) – An Iraqi lawmaker lambasted the US for trying to revive the Takfiri terrorists in the country, saying that Washington is the main sponsor of ISIL in Iraq.
News ID: 81063 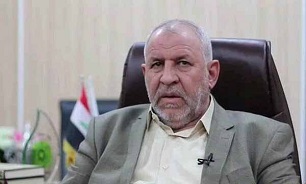 “The US has been supporting the ISIL terrorist group in different aspects to help it resume its crimes in Iraq,” the Arabic-language Al-Maloumeh news website quoted the member of Iraqi Parliament's Security and Defense Committee Karim al-Mohammadavi as saying.

Noting that the US has clearly been giving financial support to the Takfiris in the region, al-Mohammadavi said, “The country [US] has also provided the terrorists with military and logistical support, and has transferred their leader from Syria to Iraq.”

He reiterated that Washington’s support is the main reason behind the ISIL terrorists’ recent activities in Iraq that have targeted the country’s safe regions.

The Iraqi resistance groups have warned that the deadly terrorist attacks were part of a US plot to bring the terrorists back t the country.