TEHRAN (defapress) – Chairman of the Iranian Parliament’s National Security and Foreign Policy Commission Mojtaba Zonnour said on Tuesday that while the world is distracted with the coronavirus pandemic, the Zionist regime is doing its best to put Iran's interests at risk.
News ID: 81083 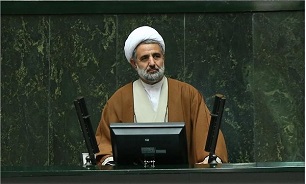 Making the remarks in the open session of the Parliament on Tuesday, he noted that during seven decades of its formation, the Zionist regime has been making some difficulties for the Muslims in the region.

Zonnour named the regime as the main axis acting against the interests of the Islamic Republic of Iran and the Iranian nation.

"Spying, terrorism, and the martyrdom of Iranian nuclear scientists, cyber and electronic warfare, and cyber-attacks on nuclear and economic centers are among the Zionist regime's actions against the Iranian nation," he said.

The MP also blamed the regime for its efforts to having sanctions imposed on Iran, the martyrdom of Palestinians, supporting Saudi Arabia in the massacre of Yemeni people.

Zonnour said that due to the pandemic, the international Quds day rallies will not be held in Iran and other countries and this may set the ground proper for Zionists to put Iran's interests at risk.

He called for Iranian MPs to ratify an anti-zionist motion to replace the canceled rallies on Quds day.

The Leader of Islamic Revolution Ayatollah Khamenei will deliver a speech on the occasion of the International Quds Day, which falls on May 22.

As reported, due to the challenges posed by the COVID-19 pandemic, the Intifada and Quds Department of the Coordinating Council of Islamic Propagation has been reviewing different options to commemorate this year’s International Quds Day.

The cyberspace and social media are among the options that could be well utilized for marking the event.

Iranian’s, along with people across the world, hold rallies every year to mark the occasion and reiterate their call for the liberation of Palestine from the Israeli regime's occupation and to denounce Israel’s atrocities.

However, this year, the coronavirus pandemic has created hurdles for gatherings of such, forcing the officials to search for alternative options.