TEHRAN (defapress) – The Head of Iran's Strategic Council on Foreign Relations deplored the US government’s unilateral policies, saying such approaches have dragged the international community to multiple crises and challenges.
News ID: 81151 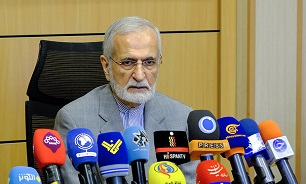 “The United States’ unilateral policies spew a lethal poison to the international community and aggravate the complexity of the world’s current situation,” Kamal Kharrazi said while addressing the third annual session of Leaders For Peace, an NGO which works to heighten public opinion and leaders’ awareness of the risks of regional and international armed conflicts.

“The current inefficiency in multilateralism emanates from the extravagance and hegemonic tendencies of the US government, which seeks to impose its hegemony and unilateralism on others,” he added.

Kharrazi then said it is imperative to form a “new world multilateralism” system and “new world unity” through which all nations, especially the southern countries, have a voice, and therefore, the new players will have a share in the international arena.

Referring to the novel coronavirus, which has been sweeping across the world in the past months, the official said, “The effective control and confrontation of this disease entail global solidarity and cooperation with the World Health Organization.”

“In this regard, the WHO chief, as well as the leaders of many countries, have called for the halt of conflicts and sanctions on countries, such as Iran, which have faced severe challenges in supplying medical needs in the fight against the coronavirus,” Kharrazi added.

He underlined the need to prevent the political interference of major powers in international bodies, such as the WHO, the International Monetary Fund, and the World Bank, saying that when the international institutions are influenced by these arrogant powers, other countries lose their trust in those institutions.

“The IMF, for example, has not yet responded to a request for a loan from Iran to counter COVID-19,” he added.

Kharrazi reiterated that “through a new multilateral world system, the big power’s approach toward other countries should change and all should be treated equally.”

The third annual conference of Leaders of Peace, chaired by former French prime minister, Jean-Pierre Raffarin, through a video conference on Monday. The session was attended 37 major political figures from world countries.