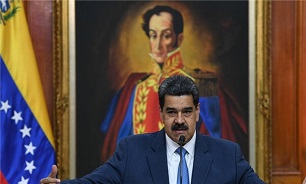 "The ‘Fortune’ became this Monday #25May a symbol of freedom and courage for two peoples: Venezuela and Iran,” tweeted Maduro while posting photos of the Iranian tanker docked in a Venezuelan port.

The tweet came as oil tanker Fortune arrived and docked at its destination in Venezuela, El Palito refinery, to deliver fuel to people who are under the intense pressure of the United States.

This was the first out of five Iranian oil tankers that has docked at the northern Venezuelan beach despite the US warnings and sanctions.

Satellite images show that the Iranian tanker named "Fortune" was completing its berthing operations while being helped by two Venezuelan tug boats at El Palito refinery.

The Iranian tanker was escorted by the Venezuelan Navy in order to reach the Venezuelan port without facing any incident which might had happened due to the US threats.

The second Iranian tanker named "Forest" had already arrived in the Caribbean Sea.

Three other Iranian oil tankers are "Faxon", "Petunia" and "Clavel" that are passing Atlantic Ocean to reach Venezuela.

The energy cooperation between Iran and Venezuela is based on the scientific exchange and the productive development of the hydrocarbon industry, in addition to the experience that unites us as OPEC countries. Thanks brothers!!, he added.

Meanwhile, commanding officer of the Strategic Command Operations of Venezuela Remigio Ceballos in a message said the National Bolivarian Armed Forces of Venezuela appreciates the solidarity of the Republic of Iran.