TEHRAN (defapress) – Iran’s Foreign Ministry Spokesperson Seyed Abbas Mousavi decried the US government’s crackdown on protests over the killing of an unarmed African-American man at the hands of Police in Minneapolis, urging Washington to stop violence and let American people breathe.
News ID: 81223 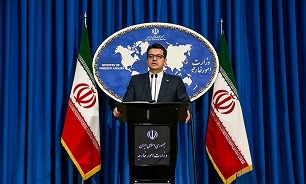 In remarks at a weekly press conference on Monday, Mousavi pointed to the eruption of demonstrations in major US cities in protest at the tragedy of death of George Floyd in police custody, and told the American people, “The world has heard your outcry over the State oppression. The world is standing with you.”

He also lashed out at the US government for its destructive domestic and foreign policies, adding, “The American regime is perusing violence and bullying at home and abroad. We are greatly sad to see, along with the people across the world, the violence the US police have recently unfolded.”

“We deeply regret to see the American people who seek respect and no more violence are indiscriminately suppressed and met with outmost violence,” Mousavi said.

“Stop violence against your people and let them breathe,” the Iranian spokesman added, addressing the US government.

In scenes both peaceful and violent across the country, thousands of protesters have been chanting "no justice, no peace" and "say his name. George Floyd."

The demonstrations came as Derek Chauvin, the officer involved in Floyd's death, was arrested and charged with one count each of third-degree murder and second-degree manslaughter.