TEHRAN (defapress) – Iraqi Army and Federal Police forces managed to arrest 12 terrorist suspects during an operation against ISIL on the outskirts of Samarra.
News ID: 81232 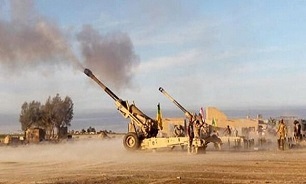 Extensive operations were carried out by the Iraqi Army and Federal Police against ISIL positions around Samarra, according to a statement released by Iraq’s Army.

The operation will be continued in the coming days to find ISIL terrorist members with the support of the Iraqi Air Force, the statement added.

In this operation, 12 terrorist suspects were arrested and seven ISIL headquarters were destroyed on the outskirts of Samarra.

Prior to this, according to a statement released by the Iraqi Ministry of Defense on Saturday night, intelligence and counter-terrorism forces have arrested one of the ISIL leaders in the suburbs of Iraq’s capital.

Iraqi security forces in another operation managed to kill a terrorist in a village in Kirkuk province, injuring his companion and confiscating some weapons.