TEHRAN (defapress) – Russian said threats hurled by the United States at other governments of imposing sanctions in case they facilitate supplies of Iranian oil to Venezuela are unacceptable.
News ID: 81253 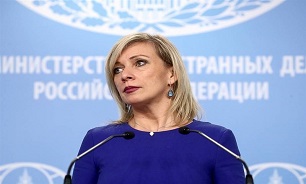 "Certain warnings voiced a few days ago by the US administration to governments around the world regarding any cooperation in Iran oil supplies to Venezuela go beyond any acceptable limits," spokeswoman for the Russian foreign ministry Maria Zakharova told a briefing Thursday, TASS reported.

"To add to the previously put forward threat against insurers and ship owners, Washington now threatens port administrations, owners and captains of vessels. In the last few days, the US Treasury expanded the sanction list by adding four more shipping companies engaged in Iran oil deliveries to Venezuela, extending the restrictions in place and other aggressive statements."

The diplomat emphasized that application of restrictive measures against Caracas affects Venezuela’s economy and social sphere. "From the international law viewpoint, this is one of the clearest examples of illegitimate nature of such steps which are exacerbated by the difficult epidemiological situation in the world," she underlined. "In the pandemic, they (steps) look cynical and inhuman and simply do not allow Venezuelan authorities to fully supply population with medicine and other equipment necessary to fight the coronavirus infection.

"We condemn this illegitimate practice and demand that these actions against a sovereign state be ceased, recalling that Venezuela’s priority now is to overcome domestic disagreements and lack of trust."

Zakharova further said, "We are calling on all responsible political forces of this country to (launch) a nationwide inclusive dialogue based on democratic principles in accordance with the national legislation."

According to the spokeswoman, the fight against coronavirus requires joining efforts. "It is high time we signed a large humanitarian agreement," she stressed. "We are ready to support such a peaceful political decision that Venezuelans themselves will come up with and provide a constructive cooperation in its implementation, fully respecting Venezuela’s sovereignty."

Five Iranian oil tankers with shipments of fuel reached Venezuela in late May.

The US had threatened to take action against the Venezuela-bound tankers and had even dispatched a naval flotilla to the Caribbean Sea.

On May 17, Iranian Foreign Minister Mohammad Javad Zarif sent a letter to UN Secretary General Antonio Guterres, warning the US about sending troops with the aim of interfering with the transfer of Iran’s fuel to Venezuela.