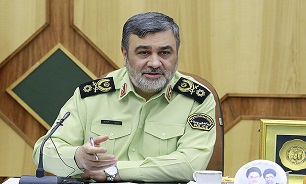 Referring to the measure taken by the US Treasury Department last month to impose a new round of sanctions against some Iranian authorities including the Interior Minister Rahmani Fazli and Police Chief Brigadier General Hossein Ashtari, he said, “The sanctions’ scenario against law enforcement officials is a threadbare tactic, and it has no value and effect.”

Emphasizing that the sanctions against the police mean disrupting the affairs of the country and accompanying with people and groups who are against social norms, especially drug-trafficking bands, Ashtari said, “We are proud that the Law Enforcement Force of the Islamic Republic of Iran (NAJA) has been sanctioned by the United States which shows that it is moving in the right direction.”

The US Treasury Department announced in May new sanctions against the Great Tehran Penitentiary in Iran's capital, the Law Enforcement Forces Cooperative Foundation, and Qarchak Prison. The sanctions are also imposed on seven other officials in the Iranian Police.

Iran’s foreign ministry spokesperson Abbas Mousavi said that the US regime's fruitless and repetitive sanctions against the Interior Minister, the police chief, and other Iranian officials are signs of the US regime's weakness, despair, and confusion.

Mousavi condemned the sanctions against Iran’s interior minister and the police chief, saying, “The US regime's addiction to imposing sanctions reflects the illegal and arbitrary behavior of the United States against the international law and order which targets the legal institutions and authorities of independent states.”