TEHRAN (defapress) – Hossein Amir-Abdollahian, the Iranian parliament speaker's special adviser on international affairs, strongly criticized the US and the Zionist regime for causing a decade-old crisis in Libya.
News ID: 81279 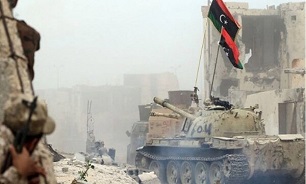 In a tweet late on Sunday, Amir Abdollahian said, “For about a decade, the US, Zionist-led crisis has put Libya on fire.”

Referring to the importance of Libya’s peace and stability for the region, the Iranian official added, “Safeguarding national unity, territorial integrity as well as restoring sustainable peace and stability of this key Arab Muslim state would serve the interests of Muslim World and the region.”

Libya has been in chaos since 2011 when a popular uprising and a NATO intervention led to the ouster of long-time dictator Muammar Gaddafi.

Since 2014, two rival seats of power have emerged in Libya, namely the internationally-recognized government of Prime Minister Fayez al-Sarraj, and another group based in the eastern city of Tobruk, supported militarily by Haftar’s rebels.

Haftar, supported by the United Arab Emirates, Egypt, and Jordan, launched a deadly offensive to capture Tripoli, the seat of the GNA, in April last year. His forces, however, haven’t been able to advance past the city’s outskirts.

International attempts to bring about peace between the two warring sides have also failed.

While the UN and international humanitarian organizations have urgently been calling for a halt in violence in Libya, the Israeli regime, supported by the United States, has been providing arms and training to loyalists of renegade General Khalifa Haftar.