TEHRAN (defapress)- A high-ranking judiciary official said some European states are not honest in their claim about supporting the Iranian nation as they provide shelter for financial and security criminals.
News ID: 81286 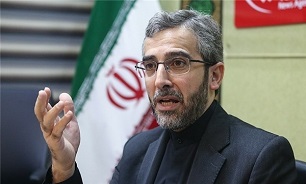 Iranian Judiciary’s deputy for international and human rights affairs, Ali Baqeri, made the remarks on Monday after the Judiciary Chief Ebrahim Rayeesi issued an order urging strong pursuit of those financial criminals who have fled the country.

“Some Western countries use all means to support those who have committed security and economic crimes and, at the same time, are impudently claiming that they back the Iranian nation,” Baqeri said.

He stressed that some European countries not only refuse to extradite the fugitive criminals, but also grant them refuge and citizenship.

“These countries are not just a safe haven for terrorists who have the blood of the Iranian nation on their hands, but also are the shelters for corrupt individuals and embezzlers, who have stolen the Iranian people’s money,” Baqeri noted.

The Iranian Judiciary official then censured the British Broadcasting Corporation (BBC) for its biased reports in support of corrupt elements escaping from Iran.

Instead of shedding crocodile tears, the BBC must "urge the British government to give response to all, including the Iranian nation, as why it has turned into the main refuge for violators of the Iranian people's rights," including their economic rights, he reiterated.

“One of the examples of injustice and major oppressions against mankind is that a few countries, claiming to struggle against organized corruption and money-laundering, have provided shelter for economic criminals and their dirty money," said Rayeesi on Monday.

He, meanwhile, ordered Iran’s Prosecutor General and Judiciary’s deputy chief for international affairs to seriously follow up the efforts to return fugitive financial criminals to the country.

Rayeesi urged those facing charges to surrender to justice and be sure that they cannot escape it.

In relevant remarks in June, 2016, then Iranian Justice Minister Mostafa Pourmohammadi lashed out at the Canadian government's lack of cooperation in the case of the former Iranian Bank Melli Chief, Mahmoud Reza Khavari, who fled from Iran to Canada during an embezzlement scandal.

"Unfortunately, although Canada is a member of the United Nations Convention against Corruption (UNCAC)", it only speaks in words, doesn’t show necessary cooperation, is not committed and has not rendered any cooperation (on Khavari's case) yet, Pourmohammadi told reporters in Tehran.

He called on the Interpol to take action and help repatriate Khavari to Iran.

Mahmoud Reza Khavari, a former Iranian banker, fled to Canada after a $2.6 billion financial fraud came to light in 2011. He was sentenced to 30 years in prison and the Interpol issued a warrant for him in December 2017.

Marjan Sheikholeslami, accused of embezzling public funds in Iran in two separate cases, has also fled to Canada. In 2010, amid the international sanctions on Iran, she founded various companies in Iran and Turkey to help Iran bypass the sanctions and sell its petrochemical products, but has reportedly refused to pay back the government’s money.