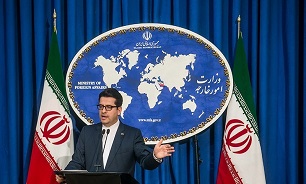 In a statement on Friday, Mousavi categorically dismissed the political and non-technical resolution adopted on Iran by the International Atomic Energy Agency Board of Governors.

“While the Islamic Republic of Iran has been working at the highest level of cooperation with the IAEA, the resolution issued by the Board of Governors is a totally unconstructive and disappointing measure,” he added.

“The move by certain governments, above all by the US, to overplay the IAEA’s requests –while the basis and principle of such requests from the IAEA are open to question- amounts to brazen attempts to create a new crisis in the way of cooperation between Iran and the IAEA,” Mousavi added.

The Iranian spokesman further called on the IAEA Board of Governor Members to be vigilant about the attempts from the US and the Zionist regime at reopening the old false cases which had been already proved to be groundless and had been dismissed by the Board of Governors itself.

Mousavi also praised the governments that have refused to endorse the resolution with a careful analysis of the situation and understanding of the political purposes behind it, adding, “Those Board of Governor Member States that voted in favor of the resolution were expected to realize the hidden objectives of the Zionist regime and the US ruling regime and not to side with their attempts at creating a new unnecessary tension in the international arena.”

The Iranian spokesperson strongly condemned the move by the three European states of the UK, France and Germany to initiate the resolution, denouncing it as a measure made under the US pressures.

“The three (EU) states which have failed completely to honor their JCPOA commitments have taken this measure with the purpose of shifting the blame and shirking their JCPOA responsibilities to Iran,” Mousavi added.

“This resolution is a blatant excessive demand and a political claim from the US and the three European states, and the Islamic Republic of Iran does not approve of excessive demands from any country and organization,” he underlined.

“The sponsors of this resolution are accountable for creating tensions in the relations between the Islamic Republic of Iran and the IAEA, and those countries must accept responsibility for the consequences of their move,” Mousavi concluded.

On Friday, the IAEA Board of Governors adopted a resolution calling on Iran to fully cooperate with the IAEA in implementing its NPT Safeguards Agreement and Additional Protocol and satisfy the IAEA's requests without further delay.

The resolution, submitted by France, Germany and the UK, was adopted by a vote of 25 to 2 with 7 abstentions.