TEHRAN (defapress)- US Secretary of State Mike Pompeo took a jab at former National Security Adviser John Bolton with a scathing tweet as the row deepens over the publication of Bolton’s tell-all memoir about President Donald Trump.
News ID: 81382 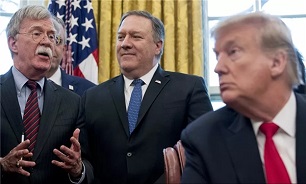 Pompeo tweeted out an image of him grinning from a September 2019 press conference where Bolton had been billed to speak. Hours before the briefing, Trump had announced Bolton’s firing via Twitter, Sputnik reported.

Pompeo, who had repeatedly clashed with the national security adviser, was asked at the time if he was caught off guard by Bolton’s dismissal, to which he replied, “I’m never surprised”.

Bolton has kept a low profile since parting ways with the administration, refusing to testify to House investigators during Trump’s impeachment inquiry, but entered the spotlight recently ahead of the publication of his memoir, titled "The Room Where It Happened".

The book, which is set to come out on Tuesday, contains several damning revelations about the president and the inner workings of his administration, according to excerpts published in media outlets. For instance, Bolton alleged that Trump had asked Chinese President Xi Jinping to buy American agricultural products to help him get re-elected, and that Pompeo once passed Bolton a note about the president, saying, “He is so full of s**t".

Pompeo announced in a statement, titled "I Was In The Room Too", that he had not read the book but the excerpts show that it is riddled with “a number of lies, fully-spun half-truths, and outright falsehood”. He went on to call Bolton a “traitor who damaged America by violating his sacred trust with its people”.

The White House sued Bolton last week to block the publication, citing the disclosure of classified information, but the request has been rejected.

Pompeo’s tweet came less than an hour after The Telegraph published an exclusive interview with Bolton, which reported that he “intends to vote for Joe Biden” in November.

“In 2016 I voted for Trump over Hillary Clinton,” Bolton, the former ambassador to the UN, told The Telegraph, adding, “Now, having seen this president up close, I cannot do this again.”

However, a spokesperson for Bolton soon issued a statement disproving the part about Biden.

“The Ambassador never said he planned to vote for Joe Biden,” the statement said, adding, “He has consistently said in recent days he will be writing in the name of a conservative Republican. Let there be no doubt — he will not be voting for Trump or Biden.”