IRGC Ready to Assist Judiciary in Action against Crimes 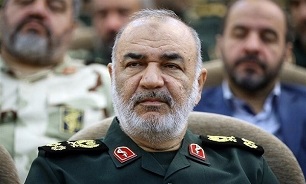 Major General Hossein Salami on Monday sent a message to Judiciary Chief Hojatoleslam Seyed Ebrahim Raeisi on the occasion of the Judiciary Week.

In the message, the general praised the top judge for his decisive action against corruption and crimes, saying such an approach has raised hopes for and built trust in defending the oppressed and taking action against those violating the rights of people and the Establishment.

Major General Salami also stressed that the IRGC is fully prepared for cooperation with the Judiciary in ensuring social health and security, promoting justice, and countering the corrupts and criminals.

Leader of the Islamic Revolution Ayatollah Seyed Ali Khamenei has permitted the Judiciary to take special measures in order to confront economic corruption and called for “swift and just” legal action against financial crimes.

The Leader has described “outright and unequivocal” treatment of economic corruption as one of the Judiciary’s major duties, stressing that confronting economic corrupts must be decisive and effective.