Iranian Adviser Urges Australia Not to Follow US Policies 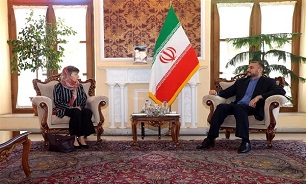 In a meeting with Australia’s Ambassador to Iran Lyndall Sachs, senior adviser to the Iranian Parliament speaker for international affairs Hossein Amir Abdollahian lashed out at the US government for fanning the flames of regional crises by forming military coalitions, calling such acts of interference and Australia’s participation in the US-led military coalitions “unconstructive”.

“We understand the bilateral relations between the US government and Australia, but siding with Trump’s illogical policies would not contribute to sustainable peace and security in the region,” he added.

The adviser further said that Iran attaches significance to dialogue with regional countries, including Saudi Arabia, stressing that regional crises must be addressed through talks, political solutions, and without foreign interference.

For her part, the ambassador voiced Australia’s willingness to maintain bilateral trade and promote relations with Iran despite the difficulties.

Sachs also said that Australian advisory forces are in Iraq and Afghanistan to train the military forces of those countries, adding that her government pushes for the establishment of international peace and stability.

In August 2019, Australia joined a US-led maritime mission that Washington said is aimed at protecting international shipping in the Strait of Hormuz.

Australia said it would contribute troops, a surveillance plane and a frigate to protect shipping lanes off the coast of Iran.