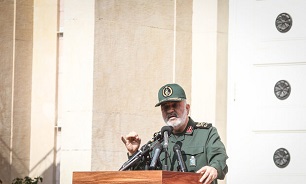 The IRGC chief visited the latest achievements of the NEZSA experts, showcased in the exhibition.

The achievements were in various sectors including drones, information technology, electronic warfare, and armor sectors.

In his visit to the exhibition, Major General Salami was accompanied by the commander of IRGC Ground Force, Brigadier General Mohammad Pakpour and other senior officials of NEZSA.

NEZSA maintains in parallel to the Army of Iran.