TEHRAN (defapress)- Spokesman of the Atomic Energy Organization of Iran (AEOI) Behrouz Kamalvandi said that the country’s security bodies have identified the saboteurs behind the July 2 explosion at Natanz nuclear facility.
News ID: 81953 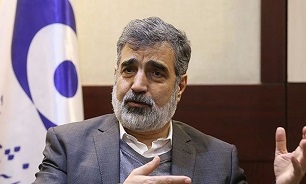 “This incident was unfortunately an act of sabotage and the security organizations should study the incident thoroughly and they have to speak about it and their investigations will continue,” Kamalvandi said on Sunday.

“As far as we know, they have identified the culprits and know their incentives and methods and actually, they have full knowledge over the issue,” he added.

Kamalvandi, meantime, said that he is not informed of the detailed information, adding that because the issue is still under investigations, no more information can be provided for now.

Kamalvandi had also said last month that the explosion at Natanz nuclear facility was an act of sabotage.

He added that the security officials will announce the details of the incident and the way it took place in due time.

Also, in July, Kamalvandi had said that his country will show a smart reaction to the recent blast at Natanz nuclear facility if it is proven that foreigners were involved in the incident.

“There is no doubt that the honorable Iran will adopt its measures based on the country’s interests. The strategic and inviolable policy of the Islamic Republic in different cases and positions is a smart and wise reaction based on the three principles of honor, wisdom and expediency,” Kamalvandi wrote in the Persian-language Etemad newspaper on July 13.

He also blasted the Western and Zionist media for not condemning the blast while claiming that the incident has happened as a result of an attack or act of sabotage.

“Such positions by the media and western officials is a double-standard behavior and unacceptable,” Kamalvandi said.

Kamalvandi said that an incident occurred in one of the under-construction sheds in Natanz nuclear facility.

One of the under-construction sheds in the open area of Natanz nuclear facility was damaged this morning and investigation into the case is underway, he added.

This incident did not have any casualties and has not inflicted any damage on the current activities of the facility either, Kamalvandi stated, noting that since this nuclear facility has been inactive, there is no worry about the possibility of contamination.