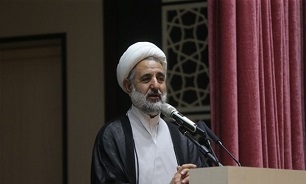 “Sacrilege of the honorable and dear Prophet of Islam (PBUH) and other divine prophets under the pretext of freedom of expression has disturbed Muslims’ sentiments and will further complicate the regional developments,” Zonnouri said in a meeting with French Ambassador to Tehran Philippe Thiebaud on Wednesday.

Elsewhere, he warned that the foreign states’ interferences have stirred instability and insecurity in the region, saying that Iran emphasizes the need to respect the countries’ territorial integrity and non-interference in their internal affairs.

Thiebaud, for his part, underlined his country’s commitment to the nuclear deal and talks among parties to the Joint Comprehensive Plan of Action (JCPOA) to resolve problems and remove obstacles, adding, “France is opposed to the US unilateral withdrawal from the nuclear deal.”

In relevant remarks on Tuesday, Supreme Leader of the Islamic Revolution Ayatollah Seyed Ali Khamenei in a statement on Tuesday condemned the blasphemous acts against the holy Quran and Great Prophet of Islam (PBUH), warning that they are aimed at derailing attention from the plots hatched by the US and the Zionists against the region.

Ayatollah Khamenei also lambasted French President Emanuel Macron and other French politicians for supporting the blasphemous acts, dismissing it as wrong and demagogic.