TEHRAN (defapress)- The commander of US Central Command stated that his country will reduce the number of its forces in Iraq from 5,200 to 3,000 by the end of September.
News ID: 81996 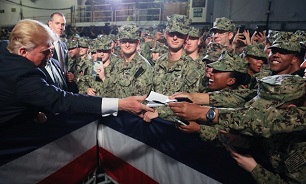 "This reduced footprint allows us to continue advising and assisting our Iraqi partners in rooting out the final remnants of ISIS (also known as ISIL or Daesh) in Iraq and ensuring its enduring defeat," Gen. Frank McKenzie said during a visit to Iraq on Wednesday, presstv reported.

The top commander also added that the decision is due to Washington's "confidence in the Iraqi Security Forces' increased ability to operate independently".

Meanwhile, a senior US official told the reporters on Tuesday that the US President Donald Trump is also slated to issue an statement over the withdrawal on Wednesday, adding that the statement will be followed by another one in the coming days on a further drawdown of US forces in Afghanistan.

The decision to reduce the US troops in Iraq seems to be Trump's last-ditch effort to deliver his 2016 campaign promises as the race for the 2020 presidential election heats up.

The Pentagon began pulling back from Iraq in March, arguing that there is no need to the US military presence following the victories against the Daesh terrorist groups.

But, on Wednesday, Gen. McKenzie explicitly linked the withdrawal to the threats from Iran.

"Over the last seven or eight months, we have had to devote resources to self-protection that we would otherwise devote for the counter-ISIS fight and we've had to pull back and our partners have had to pull back," he noted, adding, "At the same time we've done things to harden our positions to make it more difficult for Iran to attack us in Iraq --- but it has had an effect."

The US assassinated General Soleimani, commander of the Quds Force of Iran's Islamic Revolution Guards Corps (IRGC), and Abu Mahdi al-Muhandis, the second-in-command of Iraq’s Popular Mobilization Units (PMU), and a group of their companions in Baghdad on January 3. The operation was conducted with Trump’s authorization and the US Department of Defense took responsibility for the assassination.

Two days later, Iraqi lawmakers unanimously approved a bill, demanding the withdrawal of all foreign military forces led by the United States. However, Washington rejected the call to pull American forces out of the Arab country, claiming that their presence was "appropriate".