Iran Sure to React to US Recourse to Resolution 1929

TEHRAN (defapress)- Iranian Foreign Minister Mohammad Javad Zarif said his country will definitely respond to any possible US practice of UN Security Council Resolution 1929 in violation of the decision of the UNSC, adding that Secretary of State Mike Pompeo has not read the Joint Comprehensive Plan of Action (JCPOA).
News ID: 82068 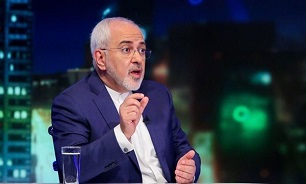 Zarif said in a televised interview on Saturday that Tehran will undoubtedly show a proper reaction to any move by Washington to restore arms restrictions after their expiration in October.

“What is clear is that all members of Security Council, except the US and one other country, have officially declared they do not recognize the US move,” Zarif noted.

“Iran is not under embargo; rather it faced restrictions for buying weapons, and in order to buy, it should have obtained the UN Security Council permit,” Iran’s top diplomat continued.

“Americans introduced a resolution that was later reduced from 35 pages to a four-part resolution. Two countries opposed it and nine countries abstained, so no veto was needed,” Zarif further said.

“As many as 13 countries are opposed to the US approach,” Zarif said, adding that snapback mechanism is not the one by which to return sanctions for the sake of a single country. All members of the Security Council, except the US, have either remained silent or said that the US has no place in this room to remain silent or make a comment.

Zarif had also said on Thursday the US is not a participant to the Joint Comprehensive Plan of Action (JCPOA), and urged American Secretary of State Mike Pompeo to read UNSC Resolution 2231.

US Secretary of State Mike Pompeo claimed that Washington delivered a letter to the UN for snapback invocation against Iran to bring back sanctions in 30 days.

Commenting on restoration of sanctions against Iran, Pompeo added, "We are confident that the trigger mechanism will be implemented against Iran".

This is while, France, Germany and the United Kingdom (E3) announced in a statement that they will not support the US snapback mechanism which is incompatible with the current efforts to support JCPOA.