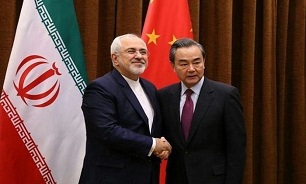 Mohammad Javad Zarif tweeted a message in the Chinese language on Sunday.

Pointing out that 2020 has been a very different and special year for the people of the world, Zarif added, “In this regard, China has managed to be successful both in controlling the coronavirus pandemic and economic recovery.”

“I sincerely congratulate these two achievements to the people and government of China”, Zarif said.

He also wished China greater success and a broader prospect for a comprehensive strategic partnership between the two countries.