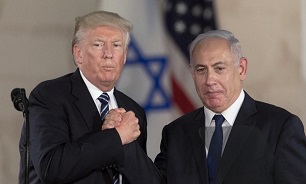 “The prime minister of the fake, occupying and infanticidal Zionist regime uses international podiums to keep telling lies, and attempts, through staging ludicrous shows, to deceive the global public opinion and international organizations with the aim of preventing the prosecution of the regime’s criminal rulers in international tribunals,” he said.

The Iranian official denounced the Israeli regime as the “biggest menace to international peace and security,” adding that it has a “nature of occupation, trickery and racism,” while possessing hundreds of nuclear warheads.

In his speech to the UN, Netanyahu claimed that Iran posed the greatest threat to peace in the Middle East, and accused the Islamic Republic of attacking its neighbors and fomenting violence in the region.

This is while Iran has never initiated a war against any nation in its contemporary history and has been among the first to rush to the help of its neighbors in their battles against terrorism.

In his speech, Netanyahu also commended US President Donald Trump for leaving the 2015 nuclear deal between Iran and major world powers and reinstating the sanctions that had been lifted against Tehran under the agreement.

He also lashed out at the UN Security Council for refusing to extend an arms embargo on Iran.

This is while the Tel Aviv regime is believed to be the sole possessor of nukes in the region.

Unlike Iran, Israel refuses to put its nuclear activities under the surveillance of the International Atomic Energy Agency.

It also defies calls to join the nuclear Non-Proliferation Treaty. Iran was among the first countries to sign the treaty.

Israel, which has several wars in its history, including three against the Gaza Strip, routinely violates the airspace of Lebanon and Syria.