TEHRAN (defapress)- Iranian Ambassador to Baku Seyed Abbas Mousavi said that friendship, peace and security will persist forever on the Iranian and Azeri shared borders, and reiterated his country's strong opposition to the presence of foreign ill-wisher in the region.
News ID: 82360 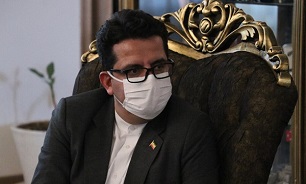 Mousavi on a Twitter post, addressing the Azerbaijan Republic’s President Ilham Aliyev, wrote, that the people living along shared border between Iran and Azerbaijan Republic will continue to live in peace, friendship and security forever, adding that there is no need for the interference of ill-wishers in the region.

He noted that the Iranian people are happy if they see their Muslim brothers and sisters in Azerbaijan are happy.

In relevant remarks on Friday, Spokesman for the Iranian Armed Forces Brigadier General Abolfazl Shekarchi warned Armenia and the Azerbaijan Republic to avoid crossing Iran’s red lines, stressing that their dispute can be resolved through dialogue.