TEHRAN (defapress)- Iranian Oil Minister Bijan Zangeneh described the US recent sanctions on him and a number of other Iranian oil ministry officials as a hopeless reaction to the failure of Washington’s policy of cutting off Iran’s crude oil exports, and said the era of US unilateralism has come to an end.
News ID: 82389 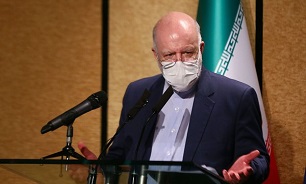 “The era of unilateralism is over in the world. Iran’s oil industry will not be hamstrung,” he added.

In relevant remarks on Monday, Iranian Foreign Minister Mohammad Javad Zarif blasted the US addiction to sanctions, and called on Washington to give up its sanction habit.

"Time for the US to finally admit it is a #SanctionAddict. Kick the habit. More economic warfare against Iran will bring the US less—and not more—influence,"  Zarif tweeted on Monday.

"NSA @robertcobrien just admitted that US has out-sanctioned its ability to inflict more pain on Iranian people," the Iranian foreign minister added.

Zarif's remarks came after US National Security Advisor Robert C. O'Brien said that "one of the problems we have with both Iran and Russia is that we have so many sanctions on those countries right now that there's very little left for us to do."

In a relevant development on Monday, the Iranian Foreign Ministry denounced the United States for its unjust sanctions against the country, describing it as an accomplice of deadly coronavirus.

The ministry wrote on its official Twitter page that Washington has exacerbated the deadly effects of the COVID-19 epidemic with its cruel sanctions imposed on the Iranian nation.

The tweet also assured that the Iranians will overcome the epidemic but they will never forget the US’ behavior.

"Corona's proven deadly, vicious & brutal everywhere, but it's worse in Iran as it has a cruel collaborator: US regime" it added.

The Iranian foreign ministry also said that the US has elevated maximum pressure on Health Terrorism & targeted Iranian ppl w/ inhuman sanx while they're fighting the pandemic.