TEHRAN (defapress)- The White House is said to be irked by the country's leading infectious-disease expert Dr. Anthony Fauci having given a wide-ranging interview in which he "appears to play politics" on the coronavirus outbreak just days before the general election.
News ID: 82444 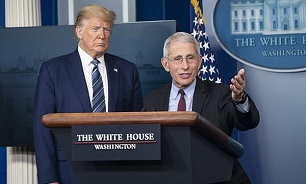 Despite having not been part of any recent White House press conferences on the pandemic for many months nor having spoken to President Donald Trump directly since the start of October, the doctor has laid bare his frustrations with how the current administration is dealing with the disease, Daily Mail reported.

The president now favors hearing from a doctor with a different point of view - Dr. Scott Atlas.

"We're in for a whole lot of hurt. It's not a good situation," Fauci said, adding, "All the stars are aligned in the wrong place as you go into the fall and winter season, with people congregating at home indoors. You could not possibly be positioned more poorly."

Fauci noted in the interview with the Washington Post that Joe Biden's campaign "is taking it seriously from a public health perspective", whereas Trump is "looking at it from a different perspective. Namely that of the economy and reopening the country".

President Trump has repeated asserted that the country is "rounding the turn" on the virus but Fauci disagrees saying the country may soon surpass 100,000 new coronavirus cases a day in what is likely to be a long and potentially deadly winter.

On Friday, 98,000 new infections were recorded across the country with 1,000 deaths a day reported on both Wednesday and Thursday. More than 230,000 have died since the start of the pandemic

Infections are currently climbing in 42 states while the president is spending the closing days of his re-election campaign criticizing public officials and medical professionals who are trying to beat it back.

Trump falsely said doctors earn more money when their patients die of the disease, building on his past criticism of medical experts such as Fauci.

At one point, Dr. Fauci was the face of the coronavirus response task force team who would host daily briefings on the outbreak.

He has since described the response as cases surge as "disjointed", with the White House solely focussed on getting a vaccine as quickly as possible, despite it not necessarily being the "silver bullet" that completely ends the pandemic.

Fauci revealed to the Post the coronavirus task force meets far less frequently now and has a more limited influence on the president's decisions as he becomes more focused on reopening the country.

"Right now, the public health aspect of the task force has diminished greatly," he said.

At one point during the Post interview, Fauci checked himself and said that he needed to exercise caution in how he was speaking else he could be blocked conducting interviews in the future.

"The last time I spoke to the president was not about any policy; it was when he was recovering in Walter Reed, he called me up," Fauci said while revealing that the president has a new favorite - Scott Atlas.

Atlas, a neuroradiologist, is now Trump's favored adviser on the pandemic because he offered guidance that more closely align with Trump's own views which is to reopen the country and let the virus spread among young healthy people.

It is not something that Fauci can agree on.

There is clearly no love lost between Fauci and Atlas either. On Saturday night Atlas posted a tweet mocking Fauci taking aim at him for giving an interview to the Post.

Fauci noted that he has a lot of respect for Chief of Staff Mark Meadows who was direct and forthright in his answers who said on CNN last weekend that the administration was not going to control the pandemic.

"I tip my hat to him for admitting the strategy," he said, adding, "He is straightforward in telling you what's on his mind. I commend him for that."

White House Spokesman Judd Deere did not take kindly to any of Fauci's remarks to the Post.

"Fauci 'knows the risks from the coronavirus today are dramatically lower than they were only a few months ago," Deere said.

"It's unacceptable and breaking with all norms for Dr. Fauci, a senior member of the President's Coronavirus Task Force and someone who has praised President Trump's actions throughout this pandemic, to choose three days before an election to play politics," he continued.

"As a member of the Task Force, Dr. Fauci has a duty to express concerns or push for a change in strategy, but he's not done that, instead choosing to criticize the President in the media and make his political leanings known by praising the President's opponent — exactly what the American people have come to expect from The Swamp."

The president has recently taken to mocking Fauci and at a recent rally essentially called him an idiot.

"People are tired of hearing Fauci and these idiots, all these idiots who got it wrong," Trump said as he recounted how the doctor one said face masks were not necessary before flipping on the issue.

Nevertheless, the White House does not seem to want to make any spat with Fauci public given his overall popularity.

However, the doctor is not revered among Trump supporters and Fauci has also told how he has experienced a rise in harassment and threats from members of the public.