Trump to go to Supreme Court to prevent election fraud

TEHRAN (defapress) – US President Donald Trump says he will be going to the Supreme Court over the election result.
News ID: 82459 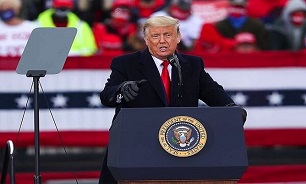 Trump, clearly unhappy that a winner had not yet been declared, has vowed to go to the US Supreme Court to stop certain postal votes being counted.

"This is a fraud on the American public," Trump claimed during his live speech on Wednesday.

"So our goal now is to ensure the integrity for the good of this nation, this is a very big moment, this is a major fraud on our nation."

"We want the law to be used in a proper manner. So we'll be going to the US Supreme Court. We want all voting to stop. We don't want them to find any ballots at 4 o'clock in the morning and add them to the list, OK?"

Trump is confident he will win the battleground state of Pennsylvania. It's worth noting, his rival Joe Biden made the same claim when he spoke from Delaware several hours ago.

"We won the great state of Ohio. We won Texas. We won Texas by 700,000 votes, and they don't even include it in the tabulations. It's also clear that we have won Georgia," Trump said.

"We're up by 2.5 percent or 117,000 votes, with only 7 percent left. They're never going to catch us, they can't catch us. Likewise, we've clearly won North Carolina