TEHRAN (defapress) – The second part of the 16th Resistance International Film Festival will be opened in Iran's southeastern province of Kerman to pay tribute to senior anti-terror commander Lieutenant General Qassem Soleimani who was assassinated by the US near Baghdad airport in January.
News ID: 82593 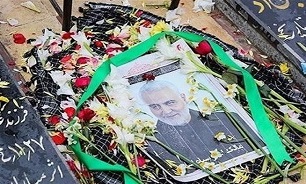 Several high-ranking Iranian cinematic officials and festival organizers are scheduled to gather at General Soliemani’s grave in Kerman on Saturday to pay their respects to the top anti-terror commander.

In the meantime, the "Resistance Prominent Martyr - Special Section" of the festival has been allocated to Martyr Soleimani.

The late General Soleimani who had a pivotal role in fighting against Daesh terrorists in Iraq and Syria was assassinated in January 2019 by the US army at the direct order of US President Donald Trump.