TEHRAN (Defapress) - US Secretary of Defense Lloyd Austin who has traveled to Palestinian-occupied territories, reiterated the US’ commitment to safeguarding the Israeli regime.
News ID: 83210 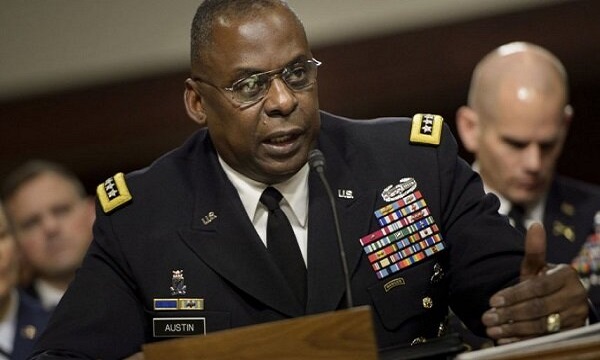 "We are committed to Israel's security," Austin said at the joint press conference with the Israeli minister of war Benny Gantz. He added that Washington views alliance with Tel Aviv as central to regional security.

He also stressed Washington’s support for the normalization of ties between the Zionist regime and Arab states, according to Israeli media.

"I emphasized to Secretary Austin that Israel views the United States as a full partner across all operational theaters, not the least Iran,” said Gantz.

Repeating allegations against Tehran, the war minister pointed to the nuclear deal and ongoing talks, claiming, “And we will work closely with our American allies, to ensure that any new agreement with Iran will secure the vital interests of the world and the United States, prevent a dangerous arms race in our region and protect Israel."

This is while the US has turned the West Asian region into an arms race field by selling billions of dollars worth of weapons to different regional countries, creating instability in the region.

Meanwhile, the Israeli regime has been one of the opponents of the Iran nuclear deal, officially known as the JCPOA, and has reportedly held talks with American delegations regarding the Biden administration’s view on the deal.

Iran has reduced commitments to the deal in a clear and reversible manner, according to the text of the JCPOA, in response to the US’ unilateral withdrawal from the deal. Tehran says all the sanctions that have been imposed against Iran during the Trump administration should be lifted for it to return to full compliance with the deal.