TEHRAN (Defapress) - Commander of the Islamic Revolution Guards Corps Navy Rear Admiral Alireza Tangsiri said that the IRGC and the Army monitor any move of the enemy in the Persian Gulf.
News ID: 83292 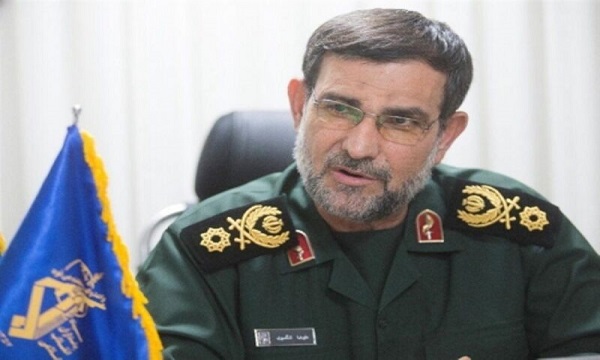 "Today, every ship that enters the Persian Gulf, according to the law on band control in the Strait of Hormuz, is monitored and has to introduce itself," Rear Admiral Tangsiri said on Friday.

"The Islamic Republic’s presence in this region is not only in the military field, but also a strategic presence in different economic, political and even cultural sectors in the national and international arenas," he added.

"The Persian Gulf is the engine of economic development and growth of Asian and European countries and the important and strategic axis of the sea, air and commercial transportation between different countries," the commander noted.

"These strategic and geopolitical positions of the Persian Gulf have led to the illegitimate presence of some Western powers and foreign countries in this region," Tangsiri highlighted.

In a relevant event in March, Army and IRGC Navy commanders signed a memorandum of understanding on intelligence, educational and research cooperation.

During the event, Tangsiri said, “There is convergence, solidarity and unity between the Army and IRGC Navies from the highest to the lowest levels,” adding, “This synergy and integration is the source of honor for the Armed Forces of the Islamic Republic of Iran.”

Tangsiri stressed that the course of unity, solidarity and energy with the fellow-combatants will never stop, adding, “The enemies of the Islamic Republic of Iran have become dumfounded against this naval might.”

Commander of the Iranian Army's Navy Rear Admiral Hossein Khanzadi, for his part,  said, “Constant and powerful presence of Navy forces of both the Army and the IRGC has deterred any aggression by enemies, as they know that any threat would receive a crushing response.”

“Security in the Persian Gulf, Strait of Hormuz and the Sea of Oman is guaranteed by Army and IRGC Navy forces,” he said, adding that the enemies do not even think of aggression as they know that any threat will receive a crushing response by the Iranian youths.”