TEHRAN (Defapress) - In a meeting with the army commander, the IRGC Commander-in-Chief praised the Army and the IRGC's progress in the field of UAVs as very valuable.
News ID: 84072 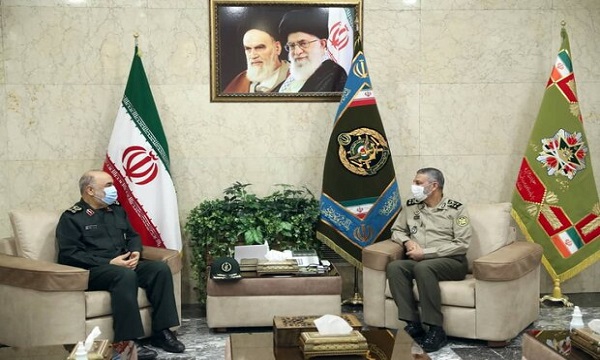 In the meeting, the IRGC top commander hailed the expertise in the army as deep-rooted and long-standing.

General Salami said that the army made great achievements during the Iraqi-imposed war on Iran in different fields of air, land and sea.

He also said that the achievements in the field of manufacturing drones in both the Iranian army and the IRGC were great, stressing the importance of focusing on some specialties, including electronic warfare.

The IRGC commander went on to stress that the unity and brotherly relations between the IRGC and the army have angered the enemies and described the high-level solidarity and unity among the Iranian armed forces as very pleasing to him.

The Iranian Army Commander Major General Seyyed Abdolrahim Mousavi, for his part, thanked the IRGC commander for his support for the IRGC and the message on the national army day and said that self-sufficiency in the army, especially in the air force is deep-rooted.

General Mousavi further hailed the achievement of the Iranian army in the field of manufacturing helicopters at the order of the commander of the chief of all armed forces Leader Ayatollah Ali Khamenei and said that the army is capable of manufacturing warplanes now.

He also expressed the readiness of the army to carry out exchange military students programs.