The recent speech by Hezbollah secretary general on the arrest of his prime minister in the Saudi capital has led to widespread regional and international reactions.
News ID: 66961 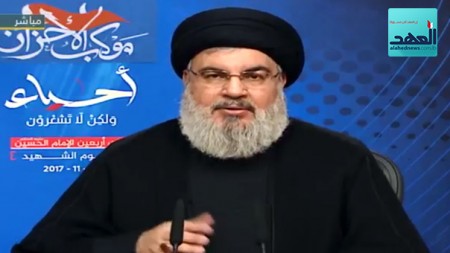 According tointernational defapress reporter: Secretary General of Hezbollah said on Saturday the Lebanese political crisis into a past and the country in the face of a new and important stage and the risks of this process is dependent on the behavior of the Lebanese and the threats and the words we hear from here and there.

According to the international press defence group, the Secretary General of Hezbollah Hassan Nasrallah on the occasion of martyr's day and Hezbollah en attended the lecture.

Nasrallah said in the speech, while today we meet with each other in such a day, "Ahmad ghasir began during a testimonial" to begin a new era of resistance and Jihad, and he was the Commander of the testimonial and the leader of the conservatives in the way of forgiveness and فداکاران esteem and dignity of Lebanon and the people of this country And the whole nation.

He went on to pay a massive gathering of en and added that the number of زائرانی en Imam Hussain (a.s) came to Karbala to 20 million people from all over the world from Iran, which only reached 2 million pilgrims to Karbala.

Lebanon's Hezbollah Secretary General added: the way Hussein (as) a large number of divine dignity brothers that same testimony they deserve because it is hand, and in fact they have been honest and sincere in their Jihad and something out of this world and has asked someone waiting asshole.

Sayyed Hassan Nasrallah said, were able to free their land and force of deterrence against Israel's threats and create hope and that we protect the security of your deployment and today and on the conspiracy against the nation's largest neutralization and countries in the region and on the religion of Islam and the moral and human values The partnership. The conspiracy in awe daesh vahabi had found effects that the U.S. Government create it and Saudi Arabia today and your last breath.

He added: today in Lebanon of whatever dignity, dignity, strength and power we have to bless the martyrs of the resistance groups and the army and the security forces. They have martyrs in this world of honor and a sense of security and peace and dignity and freedom today to bless them and multiply them to everlasting life as well as luggage. We trust this amantedar martyrs and has responsibility for all our liability because their sacrifice for everyone and not a party or group or a geographic area to have been private, but their sacrifice for all of Lebanon and in defense of the country and the nation.

Secretary General of Hezbollah added: last Saturday was a political crisis in Lebanon and the country in the face of a new and important stage and the risks of this process is dependent on the behavior of the Lebanese and the threats and the words we hear from here and there.

Nasr Allah said: over a recent years Lebanon has witnessed political stability and State had good condition so that the President and Government of national unity was formed, and its activities for active and began serious and Parliament was also active and the election law was approved and the budget and Hiring security guards, judicial, administrative and military took place among the political groups, and after years of enmity held talks. Security and stability, we like it in the world was there and earlier also said that Lebanese security over American security, and it's something that in the United States from that day until now, data on the subject.

He added: "the Lebanese people have a mental relaxation; but this is not their problem did not mean Congress is also about the activity of the airport that reflects the State of security and stability, is talking about. Positive conditions of the country due to the cooperation of all the political groups and the short coming that was all it did and this year saw the liberation of the eastern border Highlands.

Said Hasan Nasrallah added: in the shadow of such a good condition and excellent and reasonable and in the shadow of the good intentions among the different political groups for activities until parliamentary elections, Saudi Arabia quickly proceeded to call the Prime Minister and he is forced by reading a statement that they had written it Resignation and Lebanon against the new phase.

He said the Saudi action and intervention carried out in unprecedented force the head of State to resign and all Lebanese through the information and evidence on this issue and make sure all the world know of this issue and even the US State Department also announced that it will not issue Is knowledge.

Secretary General of Hezbollah arrested in Saudi Arabia in Congress "to take over and return to Lebanon, he was banned and trying to remove him from the leadership of the right flow and steps to impose new leadership without consultations with the flow right and trying that as well as the new Prime Minister On all the Lebanese President and imposing.

Syed Hasan Nasr Allah said: they believe that the new Prime Minister can impose on Lebanon and the action that they do not stimulate the Lebanese against each other, and when a response of action do not receive their Lebanese being weak and timid to the defendant, in addition to The Arab States of the Persian Gulf and to adopt measures against Lebanon and calling for the violent tension, encourage shhrondanshan, but something that is dangerous to provoke Israel to attack Lebanon.

He added: I'm not talking about an analysis but there is information indicating that Saudi Arabia has asked Lebanon to attack Israel and the Zionist regime in the discussion about this topic there.

He added: it is quite obvious that the Saudi Hezbollah in Lebanon and against Lebanon, declare war, and should be worth something that we understand in Lebanon and Saudi Arabia to the destruction and devastation you recruited and you will destroy your House with your hands, do for the elderly This will do the job? Do the interests of Lebanon, Saudi wants? We know that among the Saudi and Hezbollah, there is a problem and we cannot escape it, but we have these threats and the war against Hezbollah in Lebanon or against?

Sayyed Hassan Nasrallah said the Lebanese should be from events that occur in the region in their drawing. Saudi officials about Syria, Jordan manages the war but the result was what? They destroy Syria and those who manage the war from Jordan, where are they today? The same issue in Iraq and Yemen are also there. All Lebanese to learn thinking sing. They are located in front of the stage building and the fate of the route should be your choice.

Secretary General of Hezbollah, adding: we reveal the Saudi intervention in the internal affairs of Lebanon and condemned the action of the Prime Minister, Saad degrading them with Congress since رسیدنش to the airport we condemn Hezbollah and we believe that the insult to the Prime Minister of Lebanon to all Lebanese to It comes even though the policy differences with each other.

He said: we are also second with all Lebanese and what days the flow msteghbl announced on the necessity of returning Congress to emphasize Lebanon and Lebanon should resign if he has anything that you will tell.