most visited
عمومی << Home Page
Family of Martyr Armenian (Vigan Garapid) in a conversation with DefaPress:

Martyr Garapety's brother said: "Although many years ago our migration from Aligudarz to Tehran, but people there invite us to their happiness and sorrow. We were the only family in Aligudarz who were considered as religious minorities, and neither of our tribes lived in this city, but the people of the city never let us feel alienated.
News ID: 67791 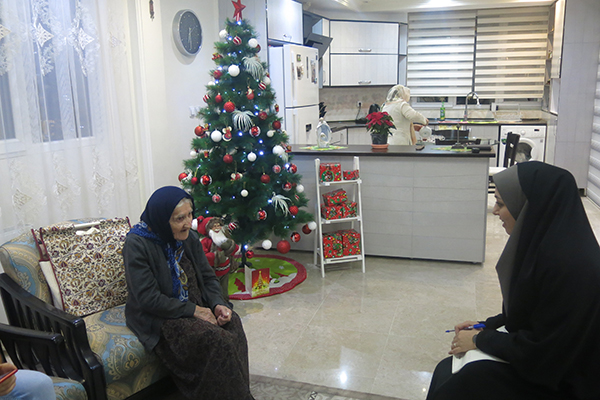 on the eve of the birth of Blessed Prophet Jesus (PBUH) as well as the beginning of the year 2018, to the House of the mother of the martyr  vigen gargpidiin The mother of a martyr for embracing the door to the House. The Christmas tree in the corner of the House. The House is ready to hold a new year's celebration. Mary and handicap their martyr, along with siblings also attended.

After the reception, the brother of the martyr skhnansh and suit deferent situations with family memories of aligoodarz began browsing and said Iranian Armenian history logging to about 600 years ago. My parents lived mohammadieh in my bradranam and sisters, and also because we all came in to the world. Although today the immigration control are some of the Armenians from the country, but we would like Iran to return home here and we know ourselves. People also are certain to distinguish our respect. Despite the many years of our immigration to Tehran from aligoodarz is going fit it, but people in their sorrow and joy invites us. We are the only family in which we were among the religious minorities aligudarz is considered and none of our relatives also did not live in the city, but the city did not allow that people never feel far from home.

He felt satisfaction with the relationship between the Shiite people, Armenians, and added: "people in various occasions aligudarz our home. Our tenant are also Shiite family travelling.

Shahid negaham mother occasionally eats node that listens carefully to our words. Before the start of an interview of martyr vigen  we see the documentary and knew he had a lot of his dependence. He wanted to tell us a little bit of martyr child. He opened with our answer on and said: ویگن responsibility and the people. Loved as much as possible to help people. It's his moral attributes inherited from his father. My wife had a broken strap aligoodarz.. If the individual to his treatment and notice that the financial situation is not good, is not only a cost, but also to get help as well. The other, of course, my children also have these features. The day my daughter Mary went to the House of one of the neighbors and the empty bread that view. This is very sad. When his father came home, they define the subject. It's time we had a lot of sheep and cattle. My wife for a week a number of cattle and sheep in its disposal of its milk to families. I recall that my wife is not the difference between the worker with his own clothes. He said that should be the difference between you and your workers or not? My wife answered that with a difference. Now also psranam of financial aid to the village and the reconstruction of the mosque does not hesitate.

Shahid's brother with a smile handicap continues his speech said: my mom is 91 years of age, with conditions for soldiers and villagers in baffd cache miss can aligudarz cold namannd. The last time my mother from doing this, so in my sound aligoodarz. Now also with personal contact every time my mother and asking for help, do not hesitate.

The mother of a martyr has once again taken the word string and says: vigen went to Tehran to study after leaving. While the format and turning his brother worked until they sent me, wants to go to the military. By this time, knew that some of the soldiers sent to the front. I wanted my child to have a role in the defense of the country, but on the other hand loved the romantic vigen. vigen to satisfy I would say: "the country today for our defense needs." her sister also had hidden his certificate, but vigen was taken and wanted to register the certificate with a copy.

It takes the mother's throat for minutes of silence in a sentence can be Fermat. The mother of a martyr with the recitation of a poem breaks the silence and sang: "I wanted to be you I am a nurse/patient deldarm ur/if God was to die/you shroud you dozam»

Shahid's mother continued: I hope no hot native son who trampled thmelsh very hard. I wish I had the time for a big vigen, but I'm glad that vigen to the way he wanted, went.

The brother of the martyr vigen by stating that the sacred defense era of 17 thousand Armenian soldiers, there are 103 martyr and 14 missing, said: my wife's brother also 61 years in Jerusalem was martyred. During the years after the martyrdom of vigen, authorities and various people came to meet my mother, but the day that came to our House to rhbarmazm never forget.

He is to express memories and said: one day I went to the Office to work for aligoodarz. As a young girl who was responsible when he heard my name. The name of my father asked. When I answer, I welcomed the opening of the Roy said that the father of the father you have defined for me that the treatment monitoring. Same here my signature tab and my work was done quickly. That year, after the death of my father, his name is alive, remember, I'm happy.

The brother of the martyr continued: one of the Nobel day on army to meet my mom manzlman. My mom said that I'm a granddaughter that I care, let that be soldier in Tehran. It's Amir together. Years later my brother and son to spend time military service registration. Training in the  lashkarak era and Isfahan in shahr reza service. During a phone call with the PR transition request army. It is also accepted. It is interesting to know the son of my brother, his military career to a garrison in lavizan that served there, vigen.

Handicap opens Telecom aligudarz pointed and said: after the completion of the imposed war, Telecom announced that construction will be prepared in the event that a telephone line to the village. I and bradranam made vigen in the village called construction. The ceremony opened with the Telecom village, superbly. The opening film at the discretion of the IRIB had put that unfortunately we brangrdandend. Now the postal service is offered in that location.

At the end of the visit, the mother of a martyr with the Armenian language and Larry sweet accent to the direction for them to go and wake of the martyr vigen, gratitude and happiness for us that prayer was very valuable.