In response to rocket firing incendiary kites on the Gaza border

The patience of the Zionist regime from causing Palestinian fire kites come to a head and the regime in the newest action towards those kites into the air chambers, firing two missiles.
News ID: 70776 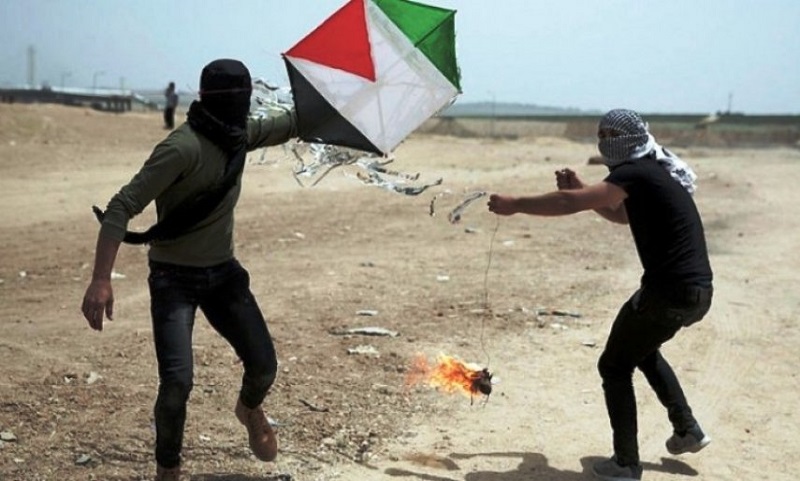 According to Defapress, The Zionist regime has today (Friday) that the Palestinian side 2 to air off the incendiary kites busy, were shot.

Based on the "al-mayadin" network, these two missiles towards the "Albarij" area of the Gaza Strip have been firing.

"Incendiary" kite’s unit known as the "alzavavi" children was threatened today five thousand kite to the occupied lands in the Gaza border will send into the air.
This is the unit in a press conference announced: the chance for the regime occupying the Gaza siege these towns adjacent to Gaza, otherwise we will have to live under fire kites.

«Mohammad Al-zavavi was the depicted engineer» last year due to the cooperation with Hamas in the field of construction of unmanned aerial vehicle, was assassinated by the Mossad.

Incendiary kites during the return March to be used so far, thousands of meters of agricultural land to Zionists and their many losses.
The Zionist regime's earlier single methods such as shooting with special lenses and پهپادهای equipped with a sharp tool on the kites to try toppled, but disregard much result.

The March back from March 30, started and still continues; so far 128 Palestinians in this action a peaceful protest to have reached nearly 12 thousand others have been wounded.
Washington again about operations in the South-West Syria region reduce stress» warned. The US State Department that the early June Meanwhile charged the woman to Damascus, Tehran and Moscow, to the Government of Bashar Al-Assad about tension in the region, reducing operations southwest of Syria was open today, warned "this is a warning.
Continue on to the Syrian Government warnings about the operation of this country and his supporters in the South-Western Syria, the US State Department to "decisive action against Damascus about violating the agreed reduction of tension warned Syria» South-West.

In early June, which was a statement against Iran and Russia, criticisms, and to the Syrian Government about the operation in the area south west of this country reducing tension warning (more details).

The Jerusalem Post newspaper's "fresh warning about this America" reported: "President Bashar Al-Assad, with the support of the Russian air force power and the Iranian-backed militia, parts of the South West, which borders with Syria, Jordan and the Golan Heights taken from insurgency and he promised that" every inch» The country's Yen to bring under control.
Message end/