Pompeo: US to Remain in Syria Until Daesh Defeated

TEHRAN (defapress)- US Secretary of State Mike Pompeo said American military forces will remain in Syria until Daesh terrorists are defeated, in what seems to be yet another sign of disagreement in Washington over President Donald Trump’s order to evacuate the Arab country.
News ID: 75164 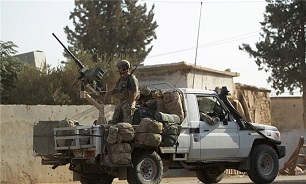 “And so in Syria, President Trump has made a tactical decision,” Pompeo told Fox News on Wednesday.

“We’re going to withdraw our 2,000 uniformed military personnel from that country, but make no mistake about it: the defeat of the caliphate, the ISIS (ISIL or Daesh) caliphate in Syria, is almost complete.  We’re going to stay there till it’s done,” he added.

Trump’s surprise announcement in December triggered a huge backlash both in and out of the US, prompting then Defense Secretary James Mattis to quit.

The opponents of the decision argued that leaving the years-long Syrian conflict amounts to a victory for Iran and Russia, who have helped the Syrian government purge foreign-backed militants from most parts of the country.

Upon unveiling his plans for Syria, Trump claimed that American troops were going back home because, with Daesh defeated, their mission there had come to an end.

He even suggested that Turkey could take on America’s military responsibilities in Syria after US forces and their equipment left the country in a process that he said would take a few months.

However, Pompeo stated that Trump was open to extending the US military mission in forms of US-led coalition airstrikes or troops deployments to certain regions.

“I think what President Trump will do is he’ll – we’ll look at each situation and make the best decision on how to approach it.  If it requires American forces to be someplace, we’ll do that,” he explained.

He rejected criticism that leaving Syria would play well into the hands of Iran and Russia, arguing that Washington would use sanctions and economic pressure to balance the situation.

“Let’s talk about happiness in Iran and Russia. What is Russia seeing from the Trump administration?  Hundreds of sanctions, an enormous military buildup by the United States of America,” he argued.

“I don’t think for one moment those two countries believe they’re in a better place today with the Trump administration than they were with [former President] Barack Obama and [former State Secretary] John Kerry in charge of this country,” the US top diplomat argued.

Meanwhile, unnamed military officials revealed to CNN on Wednesday that the US had deployed more troops to Syria to speed up the withdrawal process.

The additional troops, deployed over the past few days, would provide security for US troops and equipment via land and air as they leave the country.

They would also provide additional security as the number of US forces across Syria dwindles, the officials said, adding the Pentagon was not going to discuss the exact number of the forces deployed and the length of their mission.