TEHRAN (defapress) – A major exhibition showcasing the latest defense achievements of the Iranian Armed Forces has opened at Tehran's Grand Mosalla, with over 560 military equipment on display.
News ID: 75294 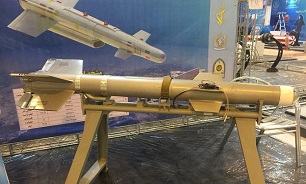 The exhibition, organized by the Ministry of Defense in cooperation with the Armed Forces and under the supervision of the General Staff of the Iranian Armed Forces, opened on Wednesday at Tehran's Grand Mosalla in the presence of Major General Mohammad Bagheri.

Over 560 domestically-developed military equipment, including various types of drones, missiles, bombs, armored and airborne equipment, weapons, helicopters, marine equipment as well as equipment to fight chemical and electronic warfare, have been put on public display.

Notable among the products unveiled at the exhibition are Iranian drones 'Kaman 12' and 'Shahed-171', as well as 'Akhgar' missile, and 'Shahin' drone disruptor.

The exhibition will receive visitors from January 30th to February 11th.