TEHRAN (defapress) – Iran and the Czech Republic have signed a memorandum of understanding (MoU) to boost cooperation in different industrial sectors.
News ID: 77476 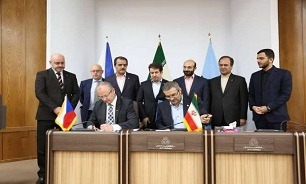 The MoU was signed between the CEO of Industrial Development and Renovation Organization of Iran (IDRO) Mohammad Bagher Aali and the visiting Deputy Minister of Industry and Trade of Czech Republic Eduard Muricky in Tehran on Sunday.

As per the agreement, an industrial workgroup between Iran and the Czech Republic will be established in IDRO headquarters and Czech Industry Ministry to expand industrial cooperation between the private and public sectors of both countries.

The agreement stipulates the two sides to provide the grounds for cooperation in different industrial sectors, including the like auto industry, rail transport, new technologies and energy industries.

Setting up joint-venture companies to expand industrial investments and renovation as well as ship-manufacturing is also stressed in the MoU.

During the meeting, the IDRO chief called for providing the necessary grounds for Iranian and Czech small and medium-sized enterprises to engage in the economic interactions between the two countries.