TEHRAN (defapress) – Iranian President Hassan Rouhani said on Thursday that “the country’s nuclear deal, known as JCPOA, is not dead yet and if it stands by the next year, all the US arms embargo will be lifted.”
News ID: 78249 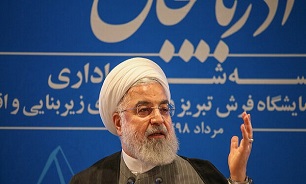 “We will be ready to trade arms as of next year,” he added, making the remarks at the session of Administrative Council of East Azerbaijan Province.

“Under the JCPOA, if it still stands by next year, the US arms ban on Iran will be lifted thoroughly and we can start buying or selling any kinds of weapons that we want,” he said, adding “Some want the deal not to survive, while it is a very important agreement regarding political and legal issues.”

Criticizing the US unilateral withdrawal from JCPOA, the Iranian President said “Risk aversion is the nature of trade and Americans have made cooperation with Iran very risky for European companies.”

He added, “The remaining parties to the JCPOA have promised to compensate for US’ withdrawal, but were unable to do so in action."

Rouhani continued, “We told them if they did not live up to their commitments, we will gradually decrease our commitments as well."

“We may reach positive results in negotiations in the coming weeks; but if we do not, we will take the third step firmer,” said the President, in reference to Iran's decision to reduce commitments to the JCPOA.

He also went on to say, “As we are able to defend our country, we will defend our economy as well."

“We will keep negotiating, but will run the country based on the assumption of the failure of negotiations,” continued Rouhani adding, “Our competent diplomats are able to defend Iranian nation’s rights with logic."

He added, “With the authorities given to the President by the Leader of the Islamic Revolution, we could reach the Geneva Agreement and unfreeze a large volume of Iran’s assets in the first 100 days after the government took office."

Rouhani also said, “In the next step, the Leader kindly told us to let the entire political system take the responsibility."

He continued, “We discussed and decided on the nuclear deal in 7 meetings of Supreme National Security Council."

“World Against Violence and Extremism (WAVE) Resolution was endorsed by the United Nations in the name of the Iranian nation,” said the President.

He said, “Increasing efficiency of our power plants to 57 per cent is a result of the Joint Comprehensive Plan of Action (JCPOA)."

He continued, “It is only in Iran’s case that the United Nations Security Council has recognized Iran’s nuclear rights."

The first phase of Combined Cycle Power Plant besides International Carpet Fair (ICF) were inaugurated in East Azarbaijan province on Thursday in the presence of President Hassan Rouhani and some members of the Cabinet of Ministers.