TEHRAN (defapress) – Referring to the elections' role and importance in boosting the country's political power in the international arena, Iranian President Hassan Rouhani said that elections determine the fate of the country.
News ID: 78991 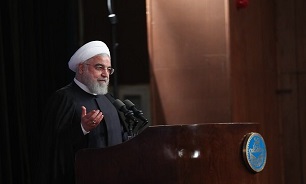 He made the remarks on Wednesday at the University of Tehran in a ceremony held to mark the beginning of the academic year.

“The best way is election poll; we should go to polls to defeat extremism, improve the society and enhance meritocracy,” Rouhani said.

“As a person who has spent most of his life in scientific and political fields, I’m telling that we have no other choice than holding a glorious election,” he said, adding that this sort of election will “enhance our political power in the world and cause enemies to fear us and understand that sanctions and pressure have had no effect.”

Elsewhere he called on the universities across the country to bring different skills into their curriculum focus. “Science is the basis for skill, advancement and development, and students have to learn skills and the future needs of society alongside science.”

“Today, the path of science and knowledge is different than before, and we need to make the student not only better prepared for tomorrow's world but also provide tools for them to be always learning,” said Rouhani, as reported by his office's website.

Rouhani described connecting the university to manufacturing and industrial centers a necessity and said that "good steps have been taken in this regard and such actions should be accelerated."

Stating that some put emphasis on constructive interaction and others on continuous confrontation with the world, he said, “Some people believe that problems can only be resolved by displaying power and destroying the enemy, while others believe that many problems can be resolved through dialogue."

"Some say that negotiating with foreigners is a waste of time and we have to confront them, and then one day they will soften their stance, while some believe that war and confrontation would not get us anywhere."

“Of course, when there is aggression, it will no longer be possible to speak of constructive interaction and its answer is clear, but the question is what to choose under the current circumstances,” he said.

Rouhani noted, "Some tell us ‘you wasted time talking to the International Atomic Energy Agency, the agency is controlled by the US and the superpowers, and talking to it is futile’, while some say we can negotiate for years and reach a conclusion."

“We were able to resolve the PMD case and announce that the case was closed. This is very heavy for some to take, like a bomb being dropped on them,” said the President.

The president added, "When we were negotiating with the six major powers, some would say that these talks are of no use and that we have to resist, while some voiced in favor of negotiation."

"It is not easy to negotiate with the six major powers of the world and get them to repeal and retract the six Chapter-VII resolutions. In addition, no country’s right to nuclear activities has not been approved by the United Nations, while it happened only for Iran, which is included in Resolution 2231."

“When the Joint Comprehensive Plan of Action (JCPOA) was reached, one of the world's leaders was shocked at the fact that the world's largest companies lined up for a deal with Iran”

“At the beginning of our first term of office, when we cut inflation, some economists complained that this was wrong, but when inflation was reduced to one-digit rate and at the same time economic growth stood at 12.5%, we amazed at the world”.

“The Zionist Regime, Saudi Arabia and US hardliners pushed the new US government to withdraw from the JCPOA,” continued the President.

“Growth will not happen without interaction with the world. If there is no export and the banks are locked, development cannot be achieved,” he said.

The President praised the friendly and neighbor countries that have cooperated and interacted with Iran despite the unjust US sanctions, adding, "Today we have trade and export transactions with other countries, and in these difficult times and economic warfare, we are entering a Eurasian union."